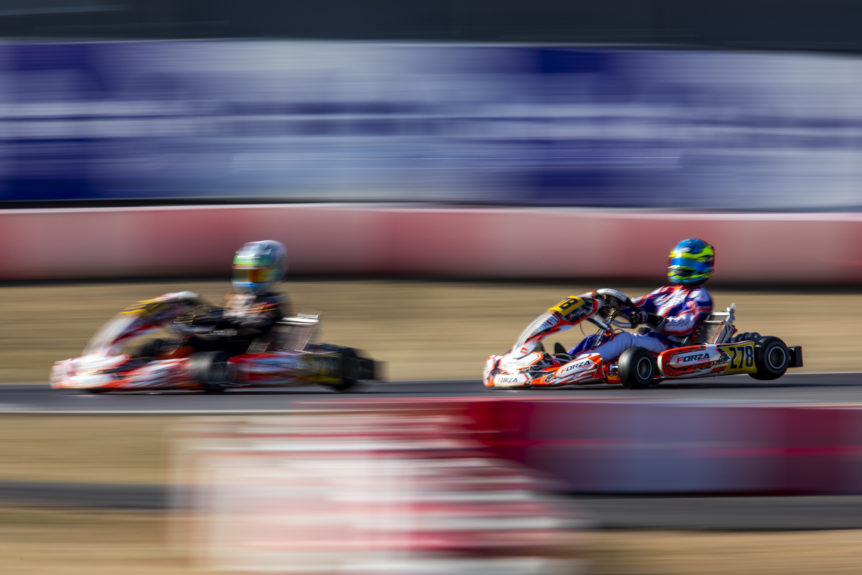 Forza Racing has filed away the second round of the WSK Super Master Series at South Garda Karting in Lonato with a P7 position by Arvid Lindblad in OKJ.

All the Team’s drivers fought for important results but some, due to unfortunate incidents, failed to make the most of their potential.

Seven were the drivers in the second round of the WSK Super Master Series:

OKJ – Lindblad and Dunne exalted in the Final, Huang and Weywadt forced to retire

Arvid Lindblad, P7 – The Briton confirms the good form he’d shown in this first glimpse of 2019, his first year in Junior. Lindblad managed to progressively improve over the weekend, up to the Prefinal where the 11th place knocked him off the top 10, and into P21. In the Final, he showed no lack of tenacity, recovering as many as 14 positions to close in P7, one step from the 5th-placed.

Alex Dunne, P20 – The result conceals the great comeback he’d managed after a series of unlucky Heats, which had seen him finish 50th. Subsequently, after qualifying at the last minute for the Final due to a small contact in the last stages of the Pre-Final, Dunne managed to make his way through the pack of opponents in the Final to end in P17, recovering 14 positions. Alas, a penalty for spoiler-release pushed him back to P20.

Xizheng Huang, Ret – The Chinese driver continues his settling-in with Forza Racing, after his debut of the Winter Cup. Here, too, Huang showed good speed skills; however, an accident in the Final put him out of contention, forcing him to abandon the race prematurely.

Jonathan Weywadt, No Final – The Dane’s weekend was all uphill. This exposed him to risks, which unfortunately cost him the qualification for the event’s Final. Despite the result, however, Weywadt also showed good pace throughout the weekend.

Dilano van T’Hoff, P12 – The Dutch driver, once again, showed great pace. After fighting constantly for the top positions, van T’Hoff’s weekend was uphill in the Prefinal, where a front fairing penalty pushed him back into P33 on the starting grid of the Final. In the Final, however, the young man did not betray expectations, closing 12th, not far from the top 10 at the height of a comeback that saw him recover 21 positions!

Zsombor Kovács, P18 – The new face of Forza Racing’s “OK” division was immediately at ease with the Exprit-powered TM prepared by GFR Engines, filing away P18 final position on his debut weekend.

Jamie Croxford, Team Owner: «I am happy with the high pace my men maintained, even though the number of drivers has increased compared to the past. The drivers, once again, did not betray the spirit of fighters which distinguishes them, collecting exciting comebacks. So far we have shown that we have good potential and, luck permitting, we can play for high stakes in both categories. After a start on the circuits of Northern Italy, we will move to the South, where we’ll begin to find different asphalts and milder temperatures; it will be interesting to understand how the drivers will react to these changes».

The next round of the WSK Super Master Series is expected for the March 10th weekend at the La Conca World Circuit, in Muro Leccese, Puglia.