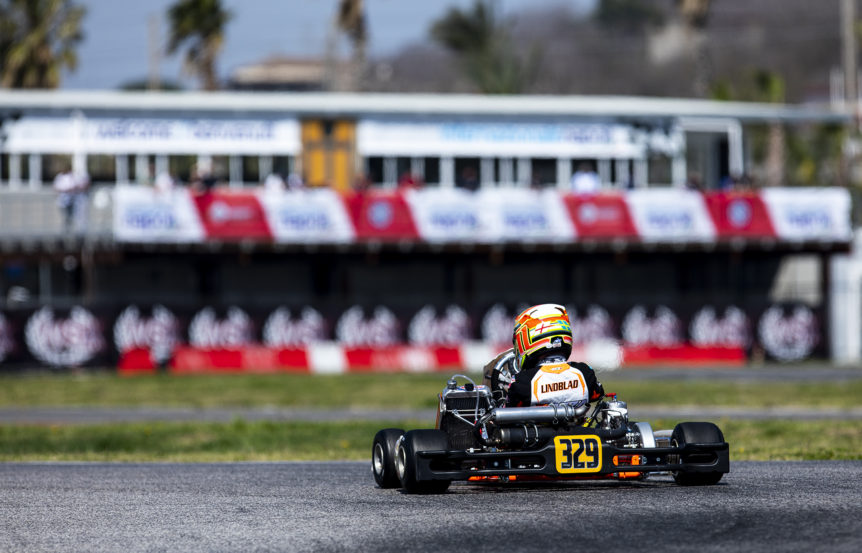 Positive weekend as regards performance for Forza Racing at the Circuito Internazionale di Napoli during the last round of the WSK Super Master Series.

Present with two drivers in OKJ and two in OK, the boys showed good speed in both classes and, in the case of Junior, an aptitude for improvement, considering that both Arvid Lindblad and Jonathan Weywadt are in the first year of OKJ, after their past in Minikart.

The best result was Dilano van T’Hoff’s 7th place, a position reached at the culmination of a comeback of 4 positions from his start position.

OKJ – Lindblad near the top10, Weywadt close to qualifying in the Final

Arvid Lindblad, P13 – After just missing the podium at the World Circuit La Conca, Lindblad started the Sarno weekend with a top20 in Qualifying Practices (P17). In the heats, the Briton slipped to 22nd position due to a contact that put him out in the first heat, compromising the outcome of the whole series. Arvid then raised the fortunes of his weekend in Prefinal B, taking 6th position. A final full of battles, then, saw him finish 13th, just off the top 10.

Jonathan Weywadt – The Dane continues to respond well to the category’s input, improving session after session. After the 33rd Qualifying position, Weywadt immediately fell to 28th at the peak of the heats. In the Prefinal, Jonathan, at the end of the race’s 13 laps, closed just half a second from the qualification.

OK – Van T’Hoff confirms his speed, Kharitonov stopped by a penalty in the Prefinal

Dilano van T’Hoff, P7 – Despite the absence in the pre-race tests due to his convalescence related to the accident in Muro Leccese, Dilano started the weekend on a positive note with 3rd place in Qualification. 9th at the end of the heats, the Dutchman fought for the top3 in the Prefinal; alas, a penalty for spoiler release dropped him to P11 on the starting grid of the Final. A Final where van T’Hoff reached the podium zone, only to fall to P7 during a much-disputed battle with rivals.

Tikhon Kharitonov – His weekend started with the 22nd absolute position, close to the top20. An unfortunate series of Heats, however, relegated him to 38th place at the end of the 3 heats disputed. Despite starting in attack mode in the Prefinal, Kharitonov had to surrender to a penalty for spoiler release that put him definitively out of the fight for a place in the Final.

Jamie Croxford, Team Owner: «Aside from the results, the boys behaved well, respecting the spirit that distinguishes Forza Racing. Certainly more could have been achieved, but the dynamics of the races are sometimes unpredictable. This weekend we have another important appointment that coincides with the first round of the WSK Euro Series.»

The team is already in Sarno to race the first of the four WSK Euro Series rounds.