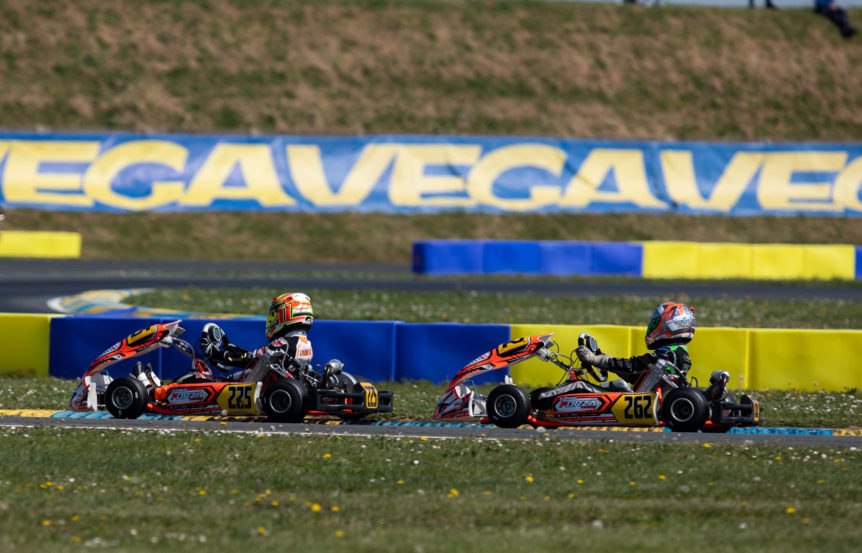 Forza Racing was immediately among the top 5 teams in Europe thanks to the 5th place obtained by Dilano van T’Hoff in Angerville in the first round of the FIA Karting European Championship.

The team was present with 6 drivers, two of whom, Arvid Lindblad and Jonathan Weywadt, took the world premiere CIK FIA races.

Dilano van T’Hoff, P5 – The Dutchman confirmed himself as one of the best OK drivers, scoring the top 5 also in the European Championship. He was extremely consistent throughout the weekend and in the closing stages of the Final seemed even able to undermine 4th place.

Gilles Stadsbader, NQ – Some problems slowed down the Belgian’s rise, who – especially in the last two heats – stood out for speed and sagacity. Unfortunately, this was not enough to qualify for the Final.

Tikhon Kharitonov, NQ – Lady Luck turned her back on Kharitonov, who failed to set right a difficult qualifying in the heats. However, the Russian confirms making constant progress in terms of driving and feeling with our Exprit/TM tuned by GFR Engines.

OKJ – Lindblad, what a comeback! Huang and Weywadt slowed in the heats

Arvid Lindblad, P22 (+5 “) – The Briton distinguished himself for gaining through the field with which, in the 5 heats held between Saturday and Sunday, he managed to recover as many as 39 positions after a complicated Qualifying Practice. It allowed him to enter the Final, where he started 30th. Lindblad then crossed the finish line in 17th position, which later became P22, due to a front fairing penalty.

Xizheng Huang, NQ – Back on track after a long break, Huang’s weekend was influenced by two retirements in the first two heats. After these, in fact, the Chinese driver always navigated in the top10 area, but unfortunately it was not enough for the purposes of qualification.

Jonathan Weywadt, NQ – The Dane’s weekend did not take off in the heats and this deprived him of the qualification for the Final. In a track where it is very difficult to overtake, Jonathan has however shown that he has the spirit necessary to face this type of competition.

Jamie Croxford, Team Principal: «I’m very happy for the 5th position of Dilano, who is confirming himself among the best drivers in his category. Gilles, Tikhon, Arvid, Jonathan and Xizheng also showed good progress, although for some of them the result did not meet expectations. Unfortunately, however, this is the tough law of motorsport, which does not always give you what you deserve. I’m sure that in Belgium they will be able to make up for it.»

The team will remain in Angerville for the 2nd act of the WSK Euro Series, scheduled this weekend.