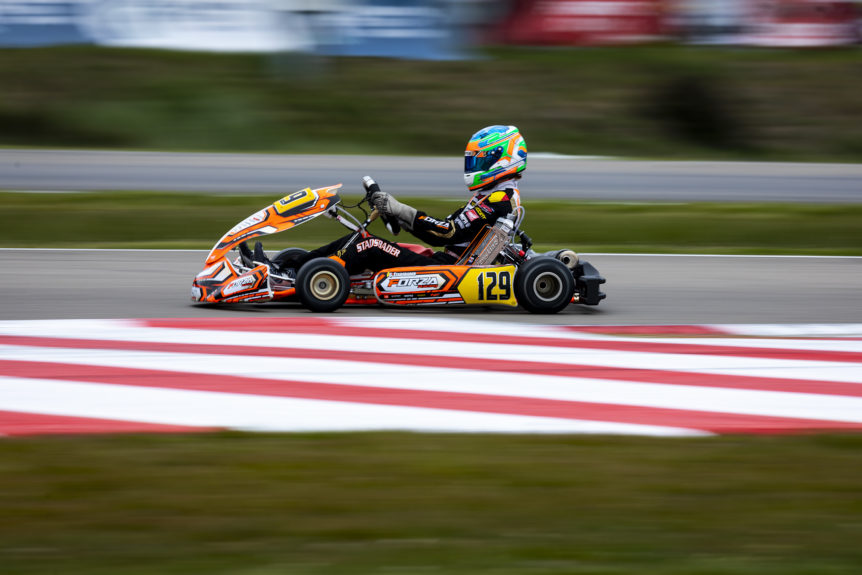 Only a front bumper penalty prevented Forza Racing from taking a well-deserved podium in the 2nd round of the FIA Karting European Championship at Karting Genk: The Home of Champions.

In Genk, despite the climatic difficulties, the team was always among the protagonists in both categories, confirming itself a front-runner in the international competitions. In particular Dilano van T’Hoff put on a show at home circuit.

3 of the 4 drivers won at least one heat, bringing the victories in the heats to 4, and all 4 completed at least one of the heats in the top5; this is proof of the excellent work done in Belgium.

OKJ – Lindblad just off the top5, Weywadt en forme in the Final

Arvid Lindblad, P8: The British driver, in the year of his debut in Junior, took an important 8th position, after fighting long and hard for a place in the top5. Lindblad showed great character throughout the weekend, taking 7th place in his qualifying group and then 8th at the end of the series of heats where he was also the winner on one occasion.

Jonathan Weywadt, P25: He recovered 9 positions over the three days of the race. From the 36th place in qualifying, the Dane finished 25th in the first international final. Positive his work in the heats where he also managed a 5th place.

OK – Only a penalty stops Dilano, good weekend for Stadsbader

Dilano van T’Hoff, P2 (+5”, P11): After the podium in the WSK Euro Series in Angerville, another podium for van T’Hoff had arrived in Belgium, then relegated to 11th place due to the spoiler penalty. The penalty thwarted the efforts of the Dutchman, always in the top 10 and protagonist in the heats with 2 victories despite the prohibitive weather conditions.

Gilles Stadsbader, P25: The home driver opened the weekend with 11th overall in qualifying (4th in his group), a result that could at least have been equaled in the heats had misfortune not forced him to retire on one occasion. Thanks to a brilliant victory with slippery asphalt, Stadsbader kept the top20 at the end of the heats and finished in 25th place in the Final.

Jamie Croxford, Team Principal: «What happened this weekend is the counterpart of a rule, that of the spoiler, which has become an influencing variable in kart racing. It’s a shame because Dilano deserved the podium. It is anyway clear that these 5″ will not cancel the good things shown by him, his team mates and in general by the whole Forza Racing team, which has never stopped in front of any difficulty.»

The next engagement on the Forza Racing track coincides with the 3rd act of the FIA ​​Karting European Championship scheduled in Kristianstad in two weeks.