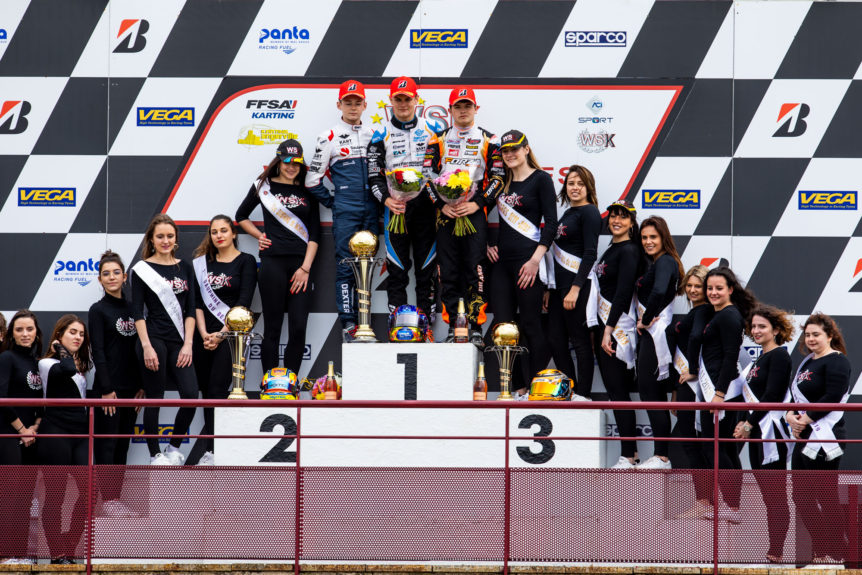 After two weeks, between FIA Karting European Championship and WSK Euro Series, Forza Racing leaves the Gabriel Thirouin International Circuit with a podium and many confirmations.

The podium matured in OK Senior with Dilano van T’Hoff, who once again proved to be among the best of the lot in his category and in this way also redeemed the unfortunate epilogue of the WSK Euro Series round in Sarno, where he was forced to retire while struggling for victory.

Good impressions also from Tikhon Kharitonov, Arvid Lindblad and Xizheng Huang who, compared to the first act of the FIA Karting European Championship, all showed significant progress in terms of competitiveness.

OK – van T’Hoff and Kharitonov do not betray expectations

Dilano van T’Hoff, P3 – Once again the Dutch driver showed all his talent by constantly racing in the top 5 with the podium in sight. Van t’Hoff laid the foundations for the podium in the Prefinal, where he finished 3rd after recovering 4 positions from the start. In the Final, he conducted a regular race with his sight on the 2nd-placed opponent.

Tikhon Kharitonov, P9 – Even Kharitonov can be happy after the 2nd round of the WSK Euro Series, where he ran in the top10. The Russian’s weekend was a continuous improvement; he started with the 15th place in qualifying and ended with the 9th position under the checkered flag of the Final. Once again Tikhon showed he has no qualms when there is to “sweat” for a result.

Arvid Lindblad, P7 – The Briton’s weekend was all a run-up to prominent positions. The change of pace was evident compared to last weekend, which allowed him to recover from the 19th place of qualifications to the 7th of the Final. Good Heats in which Lindblad, closing 8th, laid the foundations for the positive result on Sunday.

Xizheng Huang, DNF – More unfortunate Huang, forced to quit the race early. Huang, after the 25th position of the Qualifying Practices, had inaugurated a positive comeback that brought him to the 23rd place. Two retirements on Sunday took away the chance for a comeback.

Jamie Croxford, Team Principal: «It was a very productive weekend. We obtained a podium and all the drivers were protagonists of good performances. I’m sorry for Xizheng who failed to crown his comeback, but I am convinced that there will be other occasions.»

The team will take advantage of these weeks before the Genk European Championship to test on the Belgian track and arrive to the competition at its best.