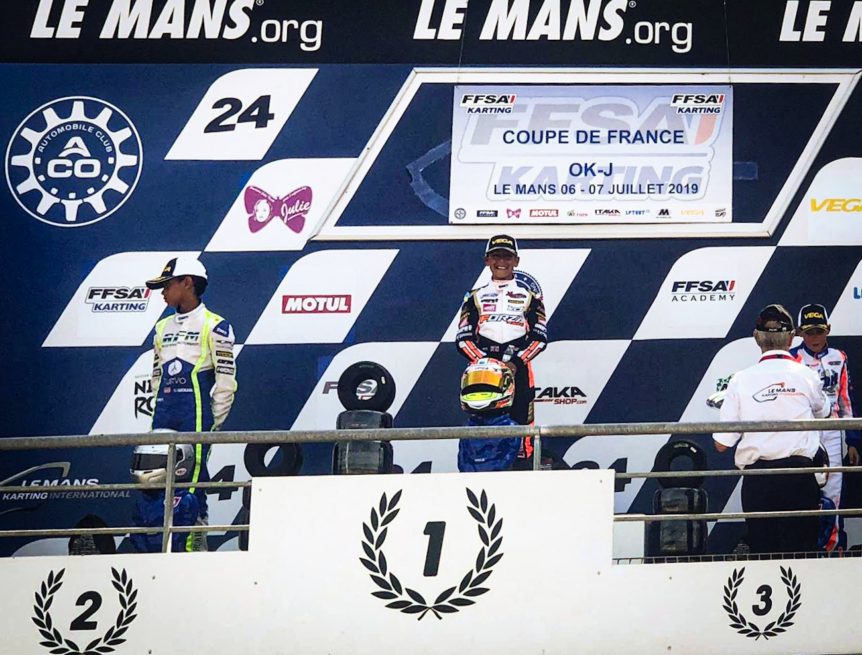 The process of getting closer to the last round of the FIA Karting European Championship for Forza Racing continues at full speed and has achieved two OKJ successes in the Le Mans “test race”.

The victories gained in Finale A thanks to Arvid Lindblad and in Final B thanks to Enzo Peugeot; excellent performances also in OK where there were three reps of the British team.

Arvid Lindblad, P1 (Final A): The Brit continued his great form in Le Mans too, a period inaugurated 3 weekends ago in Lonato with the victory in the third act of the WSK Euro Series. Also in France Lindblad was a true protagonist thanks to the pole position, the 1st place at the end of the Heats and his striking victory in the Final.

Enzo Peugeot, P1 (Final B): The home driver, at his second appearance with the team, stood out in the long run on the track that is located near the famous facility that hosts the 24H of Le Mans. In the end he too climbed the top step of the podium, in Finale B.

Dilano van T’Hoff, P5: Despite having missed all the previous tests at the official start of the event and having arrived just in time for the Warm Up before qualifying, van T’Hoff immediately showed a remarkable feeling with the track by setting interesting times in the heats and in the Prefinal. He finished 5th in the Final, being credited with the best time.

Gilles Stadsbader, Ret: The DNF in the Final betrays the importance of this test race for Stadsbader, who in any case had the opportunity to mature a lot of experience in view of the last act of the European Championship.

Matias Zagazeta, Ret: The Peruvian chose the tortuous track of Le Mans to debut with the colors of Forza Racing. After taking the initial days to become familiar with the team and the vehicle, Zagazeta started showing an interesting pace, but was forced to retire in the Final.

Jamie Croxford, Team Principal: «This weekend takes on a value that goes far beyond the trophies to be added to the shelf. The primary objective was to demonstrate, first of all to ourselves, that we had taken the right direction in view of the commitment of the FIA Karting European Championship. It is difficult to give answers, but I am satisfied. Now it’s important to keep working hard, since the race is getting closer.»

The team will remain in France in view of the official start of the event scheduled for July 19th; meanwhile, tests will continue.