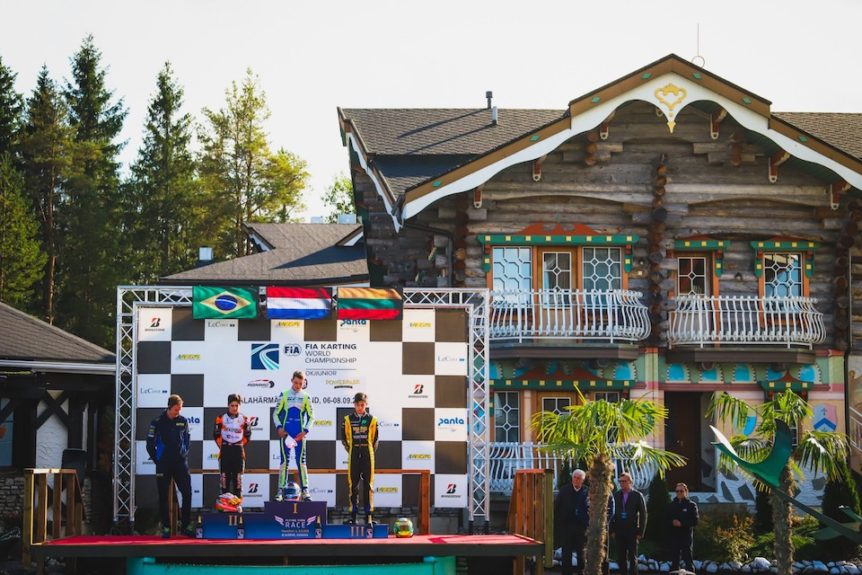 Present in Finland with 8 drivers, the team emerged despite the difficulties linked to the weather, taking home 2nd place in OKJ at the end of an exciting Final.

The weekend started off on the right foot in the heats, in which the team obtained 2 pole positions in the qualifying groups.

These are the drivers who represented Forza Racing in the FIA Karting OK and OKJ World Championship at the Mika Salo Circuit:

Despite being only his second race with Forza Racing, Rafael Camara became the protagonist of an extremely positive weekend. The Brazilian got the pole position of the group in Qualifying Practices and in his own group of Heats. Starting 5th, Camara made his way to 2nd place despite the pitfalls of a circuit that allowed few overtaking points and the everchanging track conditions due to the rainfall that preceded the Final.

Bad luck fell on Arvid Lindblad, whose weekend started off big with pole for his group of heats. A series of fluctuating heats, where the 3 podium results alternated with 3 more opaque performances due to weather conditions, relegated him to 28th place on the Final starting grid. Expected to make a comeback, luck turned its back on him and Lindblad failed to finish the Final.

Jonathan Weywadt, Paolo Ferrari and Enzo Peugeot, at the first FIA Karting World Championship, had to deal with a circuit that was extremely complex to interpret, thanks to the rain; although they didn’t make the Final, they still took home a bagful of experience useful for the future.

Dilano van T’Hoff demonstrated his sharp learning curve in this first year in Senior. First in qualifying group 3 and 2nd on the grid of group A, van T’Hoff finished the long series of heats in 2nd position, which earned him the first row on the starting grid of the Final. Starting with the best assumptions, despite the unfavorable corridor, a puddle of water put him out of the race in the early stages, putting an end to his world championship dreams.

For Gilles Stadsbader and Xizheng Huang, in his 2nd overall race in Senior, a qualifying session in traffic prevented them from earning a good position for the heats. Here, being forced to take many risks to recover, they often found themselves in the midst of penalizing situations on their journey ahead. This prevented them from reaching the Final.

Jamie Croxford, Team Principal: “First of all I want to thank every team member for their work. With the sun, with the rain, and with the cold everyone worked tirelessly to get the most out of it. I also congratulate Rafa for 2nd place in OKJ and in general with all the drivers for always giving their best even when the conditions suggested they lift their foot. I’m proud of you.”

The team’s next official appointment is on October 24th at the South Garda Karting in Lonato, home of the WSK Open Cup.

A weekend of comebacks