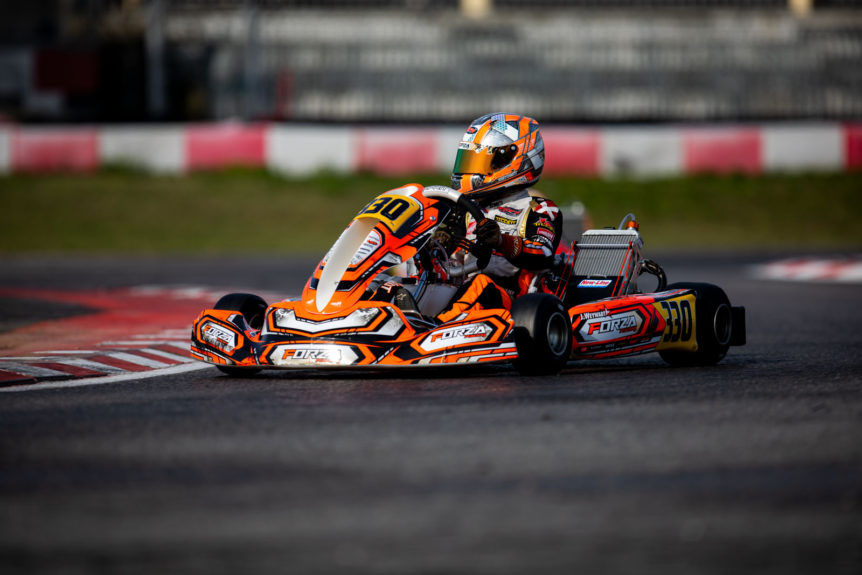 A weekend to forget in terms of luck for the team in Lonato.

In the WSK Open Cup’s opening round, several episodes spoiled the show for its drivers and, especially in Junior, determined the premature end of the weekend.

OKJ – The fast but unfortunate “Juniors”

Jonathan Weywadt acted as team leader at the South Garda Karting, where he was joined by 3 new drivers for the team, namely the Luxembourgian Maxime Furon-Castelain and the British couple formed by Maxwell Dodds and Alfie Rigby, with the latter making his debut in WSK competitions.

Unfortunately, due to external circumstances, none of them reached the Final, despite their all showing significant improvements, in the case of Weywadt, and speed of adaptation in the case of the three newcomers.

OK – Van T’Hoff comes out in the long run, Stadsbader slowed by tire problems. Camara KO for a physical problem

After a somewhat slow start, it was Dilano van T’Hoff who kept Forza Racing honors high at South Garda Karting. Thanks to a good comeback in the heats and in the Prefinal, the Dutch driver managed to get round an uncomfortable situation after a difficult qualifying session. In the Final, he finished in 7th place, a result which, without the spoiler penalty, would have been P6.

Gilles Stadsbader ended his weekend in 23rd position with a recovery of 6 positions compared to the start. Stadsbader’s weekend was spoiled by tire problems that curtailed his chance of expressing himself at his best.

OKJ vice world champion Rafael Camara, alas, failed to get on track due to severe pain to his ribs.

Another podium for the team in Adria