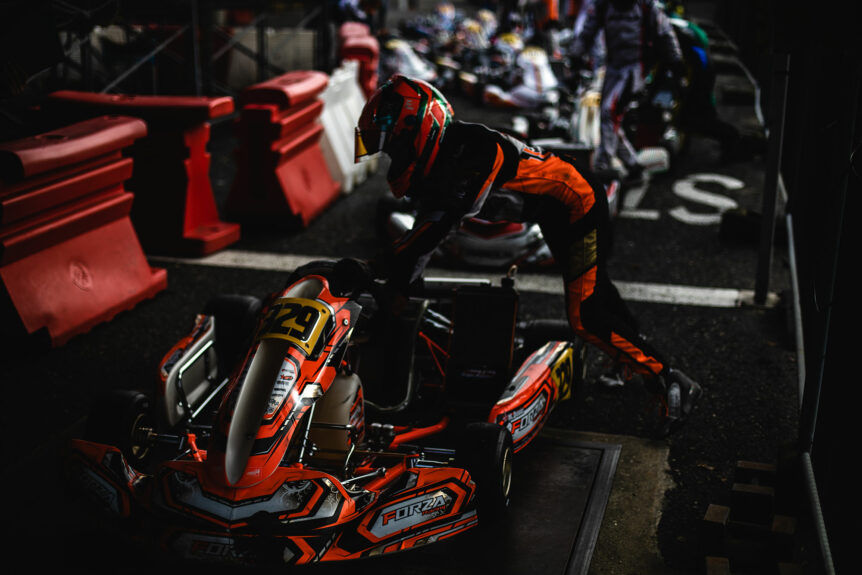 Forza Racing came close to the podium in the last act of the WSK Open Cup at the 7 Laghi Kart circuit in Castelletto di Branduzzo, Italy.

OK – van T’Hoff took the pole position, just misses the podium; Camara in the spotlight during the Heats
On a slippery track, those who made their mark on Friday was Dilano van T’Hoff, who put in the fastest time. Van T’Hoff confirmed his good form also in the heats, where he finished 4th, a result later confirmed in the Prefinal. In the Final, the Dutchman fought hard for a top3 result, and closed in 4th position, one step from the podium.

At his debut with Forza Racing, Noah Degnbol finished just outside the top10, in P12. His weekend was all in crescendo. The Danish driver, after P26 in the Qualifying Practices, progressively improved to close 22nd in the heats and 18th in the Prefinal.

The Belgian Gilles Stadsbader, after a positive 6th position in qualifying, was forced to retreat in the heats due to a last unlucky heat. A grayish Sunday, then, saw him close the Final in 25th position.

After recovering from his rib injury, Rafael Camara was finally able to start his adventure in Senior. The weather did not help, yet the Brazilian was able to assert himself in the heats, recovering from the very last position to P6 place.

OKJ – Dodds near the top10, Weywadt slowed by a penalty

After a difficult path between qualifying and heats, Maxwell Dodds switched gears, figuratively speaking, on Sunday, where he finished 13th, just off the top 10 with a good recovery.

Jonathan Weywadt, after the 9th absolute place in Qualifying, the 3rd in Group 1, was unlucky as the weekend progressed, especially in the Final where his performance was set back by a front fairing penalty that pushed him back to P25.

Jamie Croxford, Team Principal: “It was a mixed weekend. The weather conditions made things a bit difficult for everyone, but the whole team worked hard to obtain the most of it. Beyond the final result, the work of the entire Forza Racing team demonstrates how cohesive and ready we are for every challenge.”

The team is already in Adria for the last race of the 2019 racing season.