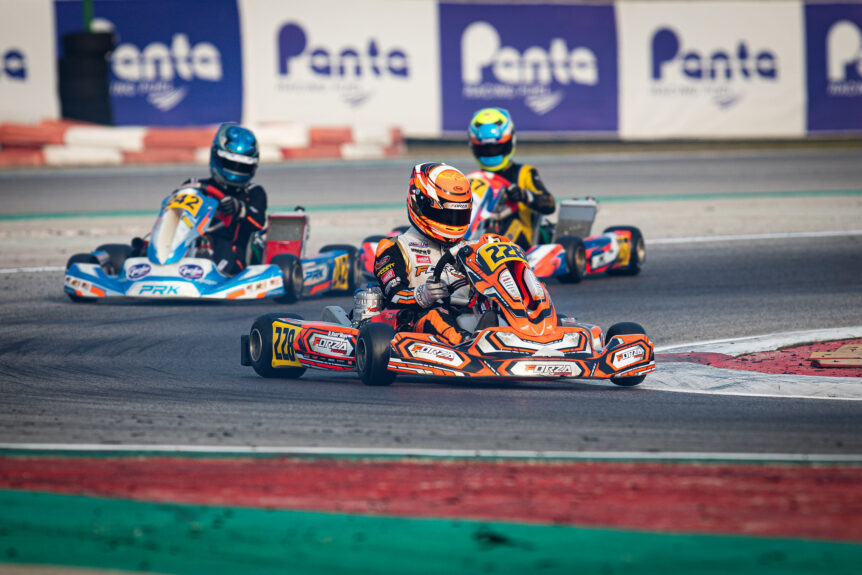 The weekend was characterized by ever-changing weather, which forced everyone to find a balance for both wet and dry conditions. Despite the high level of competitors fielded on track and the climatic difficulties mentioned above, all Forza Racing drivers qualified for the Final, except for Dilano van T’Hoff, involved in an accident in the Prefinal when he was ahead.

Gilles Stadsbader, P9: After an unfortunate qualifying session, the Belgian driver amply redeemed himself in the heats but above all in the Prefinal, where he finished 3rd. After an excellent start in the Final, Stadsbader was held back by a few duels and finished in P9.

Rafael Camara, P11 (P5, 5” penalty): A few minor physical problems resolved, the Brazilian vice world champion in OKJ 2019 was the protagonist of a weekend all in crescendo, which also saw him win the Prefinal. At the end of an extremely tight final, Camara closed 5th but was then relegated to 11th position due to a bumper penalty.

Xizheng Huang, P17: The Chinese driver, who returned to the track after a long winter break, was not intimidated by the weather and showed a malleable driving style in relation to the alternating asphalt conditions. Huang finished the race in 17th position.

Dilano van T’Hoff, Ret: After P6 in qualifying, the Dutch driver grabbed the spotlight in the heats where he finished 3rd overall. In the Prefinal, van T’Hoff was the victim of an accident, of which he was totally innocent, which forced him to retire when he was in command of the race.

OKJ – What a comeback for the Juniors!

Jonathan Weywadt, P13: Initial difficulties put aside, Weywadt ushered in a particularly steep learning curve, which saw him finish 13th with as many as 14 positions recovered from the start.

Maxwell Dodds, P16: The Briton fought hard to recover a series of not especially good heats; in the end, the 16th position – with 8 places recovered from the start – repays him for the efforts made.

Matheus Ferreira, P24: The Brazilian driver, at his debut with Forza Racing, had to deal with a weekend of settling in with his new equipment. Ferreira improved lap after lap, proof being the final where he finished 24th, having gained 9 positions from the start.

Gustaw Wiśniewski, DNF: After a crackling 3rd position in his qualifying group, the Pole immediately found himself succumbing to it being only his debut in OKJ. In the Final, Wiśniewski was unfortunately forced to retire.

Jamie Croxford, Team Principal: «The Champions Cup is traditionally a complex race, the weather often puts the team drivers to the test. My staff did everything possible in order to put the drivers in a position to give their best and they also gave 100% during each session. This is the right attitude.»

The team is already ready for the first round of the WSK Super Master Series, in program in Adria.