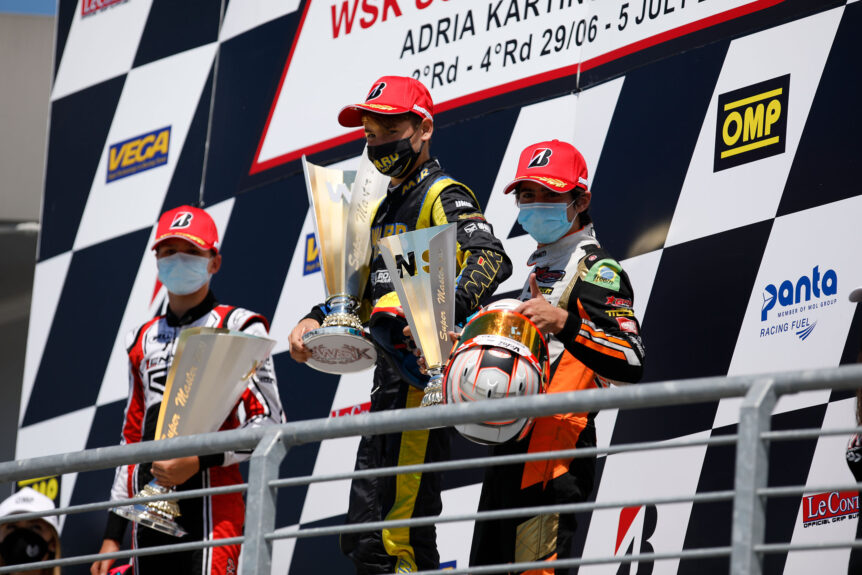 Forza Racing’s 2020 starts up again with a podium in the final of the 4th round of the WSK Super Master Series in the OK class, thanks to Rafael Camara.

Overall, the team’s performance showed a great improvement curve over the weekend, despite several unfortunate episodes which, in some cases, prevented from maximizing the result. The restart, the heat, and the two races brought together in a week were a difficult test for the drivers, who however showed their grit and worth.

OK – Rafael Camara: An unfortunate round 3 coincides with a much more profitable round 4, where “Rafa” finished on the podium in 3rd place after occupying the 2nd position for several laps. Camara, after the title of vice world champion OKJ, is proving to be among the drivers to beat also in Senior.

Dilano van T’Hoff: The Dutchman was the protagonist of a weekend that was in crescendo with a single “stop”, that is, the Final of round 3 from which he remained out for reasons not attributable to him. On Sunday, however, a good comeback allowed him to finish in the top 10.

Luca Leistra: At his debut with the team colors and with the Exprit material, Luca hit the top20 in Round 3, finishing 18th, while in Round 4 he signed a comeback of 8 positions that placed him in P21.

Gilles Stadsbader: Two 25th positions, this is the spoils of Stadsbader. The importance of this result should be read in light of the physical difficulties that the Belgian is facing due to the impressive increase in height.

OKJ – Maxime Furon-Castelain: The Luxembourg driver did not have a chance to run as soon as the lockdown ended, so despite the delay in preparations compared to his opponents he managed to put himself in the spotlight closing in 13th position and 18th in the two Finals staged.

Jonathan Weywadt: A slight injury made things more difficult for Jonathan who brought home the P21 in the Final of Round 3, while in Round 4 an accident of which he had no fault forced him to retire in the Prefinal and therefore the consequent elimination from the Final.

Jamie Croxford, Team Manager: “It was a very tough weekend from all points of view. I’m happy with the podium, but even more with the efforts made by the whole team. We’e working in the right direction; there’s a lot of confidence for the future.”

Forza Racing will be back on track already this week for the first act of the WSK Euro Series.