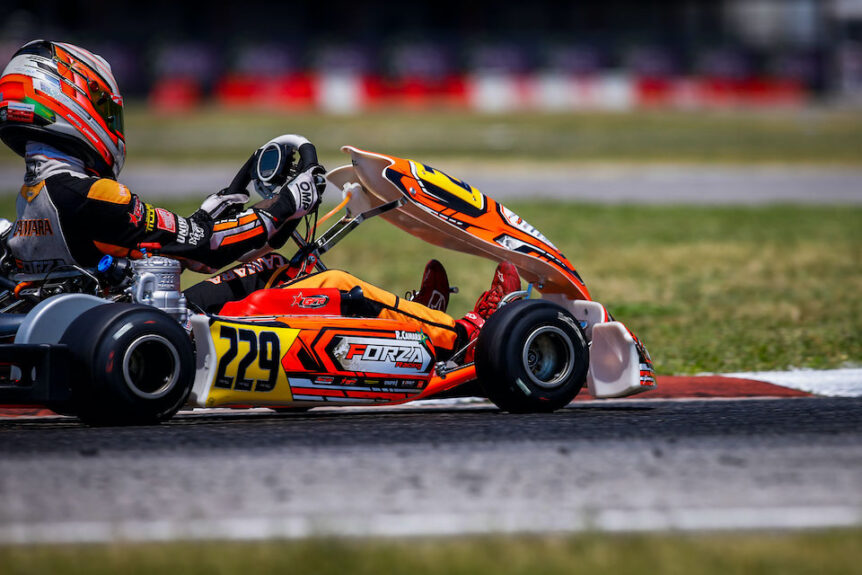 The results of the first round of the WSK Euro Series placed last weekend at the Circuito Internazionale Napoli didn’t justice to team’s efforts.

Forza Racing deployed Maxime Furon-Castelain and Jonathan Weywadt in OKJ, Dilano van T’Hoff, Rafael Camara and Luca Leistra in OK. Everyone showed good potential, despite a few problems did not allow him to maximize the result.

Dilano van T’Hoff was able to raise his weekend thanks to a 5 positions recovery in the Final, which allowed him to finish in 4th position. A contact while he was fighting for a podium step, forced Rafael Camara to retire. Same fate for Luca Leistra who, due to a small contact, failed to complete the comeback and was pushed back to 24th place with a bumper penalty.

Luxembourg driver Maxime Furon-Castelain thanks to a recovery of 3 positions ended in the top 20, in 17th place. Jonathan Weywadt gained 7 places from the start and he crossed the finish line 26th, showing good progress over the weekend.

Jamie Croxford, Team Manager: «The team made a great effort to cope with the heat and keep high the performance level. We get caught in too many incidents and probably and this made things harder, but motorsport is also made up of days like this. The important thing is that we know we have the potential, the results will come. »

The team is already at the Circuito Internacional de Zuera to take part in the Round 1 of the RGMMC Champions of the Future.