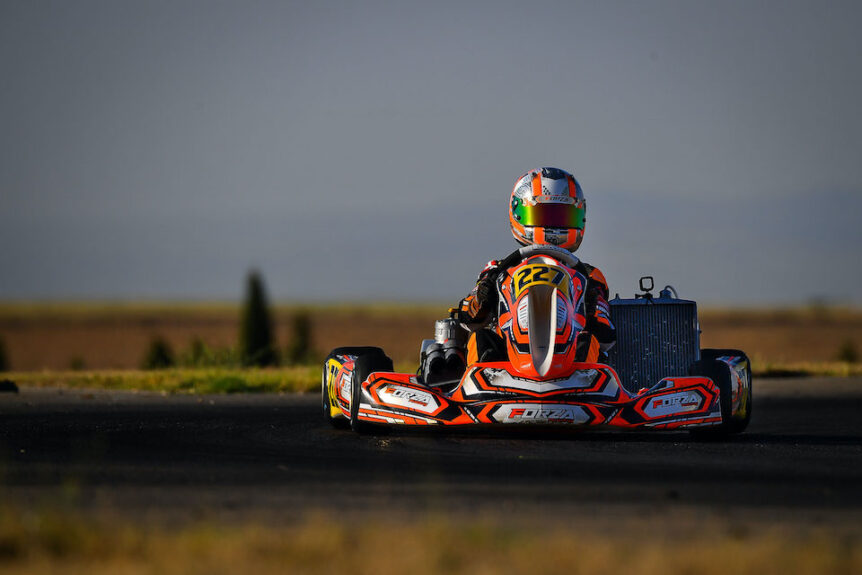 Ups and downs for Forza Racing in the first act of the 2020 FIA Karting OK & OKJ European Championship placed last week at the Circuito Internacional Zuera.

After a complicated start in the Qualifying Practices, the drivers recovered many positions throughout the heats and the Finals showing a complete different pace that was the result of the team’s hard work.

OK – Rafa and Dilano return in the Final

Rafael Camara, 10th. The 2019 Junior Vice-World Champion had a difficult start. He was 40th in the Time Practices ranking, that meant the exclusion from the Final. But the Brazilian inverted the trend in the Heats and he succeeded in gaining a ticket for the Final. In this one, he started from P34 and he was able to gain 24 places that allowed him to finish the race in 10th place.

Dilano van T’Hoff, 17th. The Dutchman made a return of 23 positions between the Qualifying Practices and the Heats and he started from P30 for the Final. In this race, as his team mate Camara, Dilano too made an exciting comeback. He crossed the finish line 17th with 13 positions gained.

OKJ – Weywadt close to top10, Furon-Castelain recover in the Final and Wisniewski brush the Final.

Jonathan Weywadt, 11st. The boy from Denmark showed a good pace all weekend. He qualified 19th overall, improving to  P16 after the Heats. Another positive performance in the Final allowed him to finish the race in 11th place so very close to top10.

Maxime Furon-Castelain, 15th. Maxime’s weekend started with 6th place in his qualifying group. He was 45th overall. In the heats he did a very good job managing to recover 11 places. In the Final he finished 15th with 19 places gained.

Gustaw Wiśniewski, DNQ. Gustaw returned with Forza Racing after the long break caused by the lockdown. Despite it being his first experience in the FIA Karting competitions, he showed good progress and he missed the access to the Final for not so many penalty points.

Jamie Croxford, Team Manager: «We have mixed feelings after this weekend of race. I expected a little bit more in the first two days, but in the last day all the drivers have completely witched mindset and they did incredible comebacks. This shows that we have the pace to stay on front, we just need to be more regular during all the competition.»

Forza Racing season will resume in 3 weeks in Sarno.

Lots learned in week(end) for the team in Lonato

Wackersdorf, we are on the podium