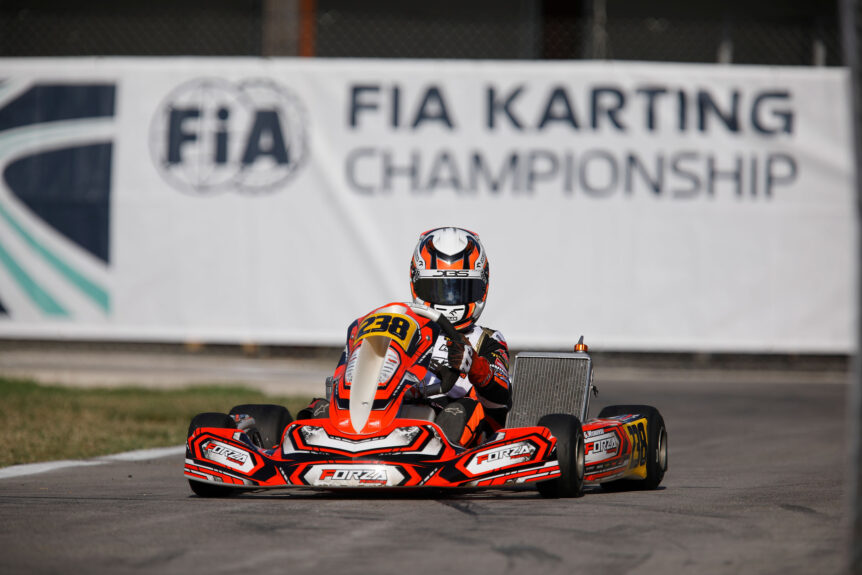 Despite the great potential, Forza Racing did not achieve what it deserved in the 2nd round of the FIA Karting OK / OKJ European Championship held in Sarno.

OK – Camara confirmed his strength, Dilano again on top10. Thompson out of luck in Final

Rafael Camara, 5th – The 2019 OKJ Vice-World Champion finished 5th in his qualifying group (18th overall). Rafael brilliantly won the first heat. Then he finished 4th and 9th. A contact in the last heat pushed him back to Row 10 in the Final starting grid. Another good comeback in the Final allowed him to grab the 5th place under the checkered flag with 10 places gained.

Dilano van T’Hoff, 8th – The Dutchman started the weekend with the 4th place in the Qualifying group 2. In the Heat Dilano managed to stay away from the troubles and this allowed him to finish the heats in 10th place. In the Final he finished 8th gaining 2 positions from the start.

Harry Thompson, DNF – The new face of Forza Racing had a weekend with 2 faces. After a difficult Qualifying Practice, he showed all of his talent in the Heats. He took the access to the Final but a crash in the first corners forced him to retire.

Gustaw Wisniewski, 22th – The Polish was the protagonist of a big return after the Qualifying Practices. In 5 heats, Gustaw finished 3 times in top10. Starting from P29, he crossed the finish line 19th but a bumper penalty pushed him back to P22.

Maxime Furon-Castelain, DNF – Maxime had some ups and downs that didn’t allow him to take what he deserved. In the Heats he proved all of his talent. Starting from P18 in the Final, a crash forced him to retire.

Jonathan Weywadt, DNQ – Jonathan showed a good speed in many occasions but the luck was not with him. The series of Heats was not the best and this didn’t give him the possibility to take the access to the Final.

Jamie Croxford, Team Manager: «It’s difficult to say if this weekend was positive or not. For sure everyone showed big progress, the pace was good and the speed too. We probably missed something that didn’t allow us to take what we deserved. I’m confident that the hard work of my staff will help to turn the pace into good results».

The team will now move to Wackersdorf to prepare the third and last act of the FIA Karting OK & OKJ European Championship.