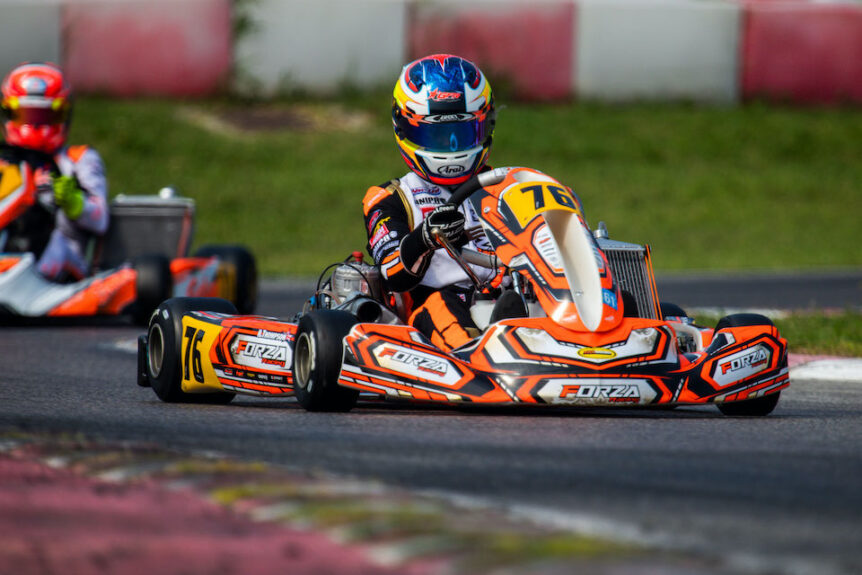 For the first time in its history, in fact, the team will participate in both world championships, direct drive classes and shifter classes. This forced Jamie Croxford’s staff to draw up a dense program of tests, including the races preceding the two events, to arrive as ready as possible.

The week of WSK Euro Series rounds 2 and 3 staged at South Garda Karting in Lonato, where both OK and OKJ and KZ2 drivers were present, was the first test.

In OK class, Rafael Camara and Dilano van T’Hoff confirmed themselves as the top- seeded drivers. The two maintained their leading positions both in qualifying and in the heats of both rounds. In the Round 2 Final, Rafa was forced to retire after being involved in an accident, while in the Final of Round 3, after an encouraging start, he finished 11th. Dilano, on the other hand, in the Final of Round 2, finished 8th with a positive comeback, while in the final of Round 3 he finished 12th behind his teammate.

Harry Thompson, at his first in KZ2 with OTK material and TM Racing engine, was the protagonist of a weekend that was all on the rise, despite a lack of luck which prevented him from accessing the Finals on Sunday.

Finally, in OKJ, due to fortuitous circumstances, both Gustaw Wisniewski and Joel Bergström remained out of the Finals; however, there is moderate positivity for the data collected both on the chassis and on the engine level.

Jamie Croxford, Team Manager: «If we look at the results, it may seem like a negative weekend, especially after a very profitable round of the European Championship like the one in Wackersdorf was; however, we used this week to try out what’s necessary in view of the double world appointment. In this sense, the Lonato track is the best from that point of view, as it guarantees a very varied layout and plenty of “tyre” on the asphalt.»

Forza Racing will be back on track in two weeks again in Lonato in view of the FIA Karting KZ and KZ2 World Championships with British driver Harry Thompson.