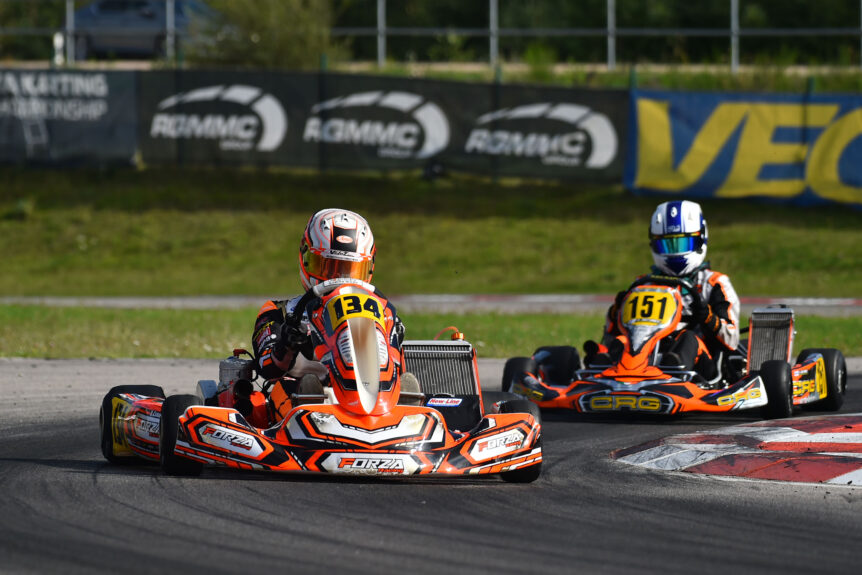 Forza Racing closed the 2020 FIA Karting OK & OKJ European Championship with a 2nd place result in the OK Final at the Prokart Raceland.

In Wackersdorf, the team showed a good pace in both the categories; the podium result confirms Croxford’s squad as a front ender in Europe.

OK – Rafael Camara, 2nd. The Brazilian was one of the protagonists for the entire weekend. He set the 2nd fastest lap in his group, and he took a victory, a 2nd place and two 3rd place in the heats. Started from P3, Camara also threatened the leadership in the first part of the race.

OK – Van T’Hoff D, 15th. The Final result didn’t reflect Dilano’s pace, who was very regular during the heats avoiding crashes. Started from P22 in the Final, he finished 15th, although a technical problem didn’t allow him to show his pace.

OK – Thompson H, 16th. Harry originally crossed the finish line in top10 – 9th – but a bumper penalty pushed him back to P16. Despite the Final result, the Briton significantly improved his feeling with the chassis and the engine appearing very consistent.

OKJ – Furon-Castelain M, 22nd. Maxime started his weekend with a tough qualifying practice. During the Heats, he changed his strategy, and once again, he was one of the fastest of the field. Started from P36, he finished the race 22nd, returning 14 places despite Wackersdorf track offers not so many occasions to overtake.

OKJ – Bergström J, DNF. Joel was at his first race with us and the first since the lockdown has ended. He immediately reached a good feeling with the chassis. He was 5th in his qualifying group. Two bumper penalties made things harder at the end of the Heats. Started from P30, the Swedish was involved in a crash that forced him to retire from the race.

Jamie Croxford, Team Manager: «I’m overall happy with the team’s results in Germany. The podium is not the only reason to smile. Finally, everyone was fast, with some more luck, I’m sure that the result would be different. I’m sure that this is a good point to start for the second part of the year, including one of the most important races of the year: the World Championship.»

The team will move to Lonato to compete in the last two rounds of the WSK Euro Series that will be placed in the same week. The doubleheader will start on Wednesday.