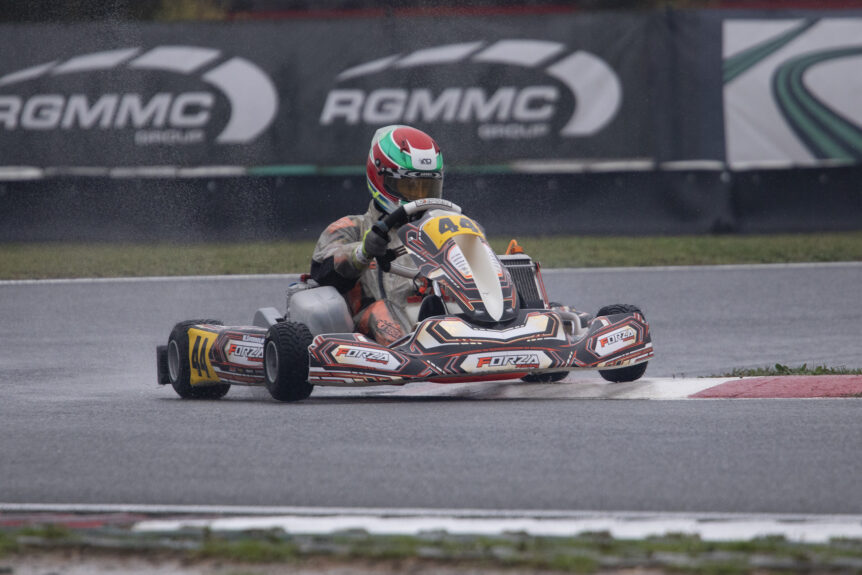 Forza Racing has completed the 2020 FIA Karting season at the Kartodromo Internacional do Algarve.

The weather was an important variable since there were all possible weather conditions: wet, dry, and drying. Despite this, the Forza Racing drivers showed a remarkable pace that allowed them to be considered among the fastest on the track. After a wet qualifying Friday, the drivers held the heats on a dry track; the rain then returned to “shuffle the cards” on Sunday.

In OK, the team was present with 3 drivers, Dilano van T’Hoff, Rafael Camara, and William Siverholm.

After a difficult qualifying practice session where he obtained the 13th time, Dilano recovered during the heats. The Dutchman recovered 23 positions in the heats despite an unfortunate retirement. Van t’ Hoff started 28th in the Final, but he was involved in the big start crash. Quickly repaired the kart thanks to the mechanic Oscar’s help, he was able to recover 13 more positions – despite a bumper penalty – and crossed the finish line 14th, then relegated 15th due to the penalty. It does not cancel the incredible work of Dilano, who managed to recover brilliantly from the 51st position in the qualifying ranking.

Rafael’s retirement in the final does not cancel out the Brazilian’s excellent performance. Especially in the heats, he stood out for his speed and concreteness. Thanks to 3 top 10 out of 4 heats (1 finished in 2nd place), Camara earned the 6th row on the Final’s starting grind thanks to a comeback of 21 positions compared to qualifying. Unfortunately, a technical problem not attributable to the team or to the engine partners TM and GFR forced the Brazilian to retire.

The mixed conditions made things a bit more difficult than the test race for William. The Swede, like his two teammates, shone in the dry. Thanks to a solid series of heats, Siverholm recovered 16 positions compared to Friday. Started 33rd, he was then forced to retire.

In OKJ, Maxime Furon-Castelain, Gustaw Wiśniewski, and Jonathan Weywadt were the standard-bearers of the team.

While Maxime and Gustaw, despite a brilliant series of heats, unfortunately, remained out of the Final, Jonathan stood out for great regularity. After the 7th fastest time in his qualifying group, the Dane managed to qualify for the final without any problems. In the latter, Weywadt crossed the finish line in 20th place.

Jamie Croxford, Team Manager: “It’s been a hectic week. We were all surprised by the weather, especially because in the Champions of the Future race it was completely different. However, we quickly adapted and showed great speed. Unfortunately, the final result does not do justice to the drivers’ work on the track, but no one can question the technical potential expressed. “