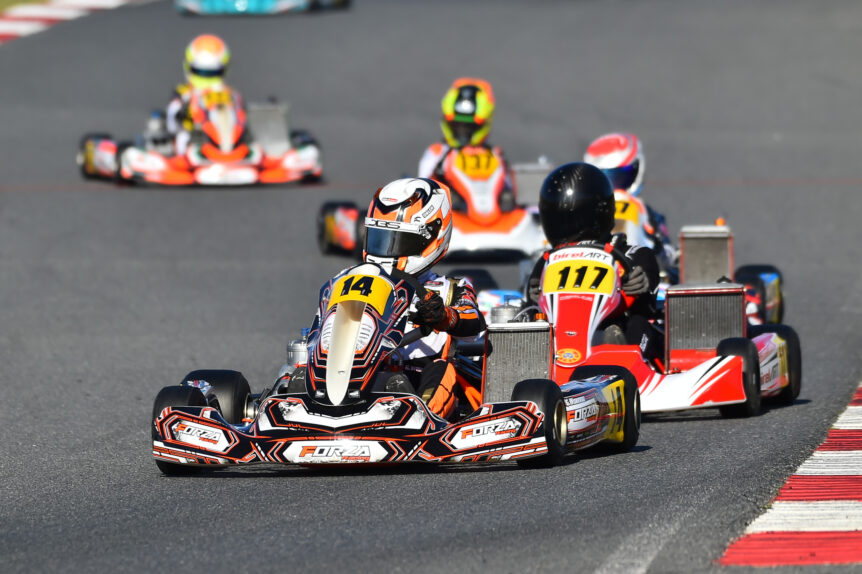 Forza Racing shined in the second and final round of the RGMMC Champions of the Future, valid as a test for the upcoming FIA Karting OK & OKJ World Championship.

The team achieved a double podium in OK thanks to Rafael Camara and the new face William Siverholm. In the general classification, there are two Forza Racing drivers in the top 5, Camara 3rd and Dilano van T’Hoff 4th.

OK – A competitive three of a kind

Siverholm surprised everyone in the Qualifying Practices, he took the group pole and the 2nd place overall. Camara also did well, 3rd in his session. Van t’ Hoff finished 10th in Group 1. All three confirmed their success in the heats, and then in the Prefinal. On the starting grid of the Final, Camara was 3rd, Siverholm 5th, while van T’Hoff 8th. In the first laps of the race, they battled for the victory. Camara finished 2nd, Siverholm 3rd, while only a bumper penalty prevented van T’Hoff from confirming his good potential; Dilano finished 14th.

Gustaw Wisniewski and Maxime Furon-Castelain’s race ended prematurely in the second chance heat, after being the protagonists of significant improvements between the Qualifying Practices and the Heats. Jonathan Weywadt, on the other hand, had a whole weekend in crescendo. However, a bumper penalty in the final relegated him to P20.

Jamie Croxford, Forza Racing: «I’ve to admit: the guys did an amazing job. They convinced me we have a good base for the World Championship. Of course, this was a test race, so we don’t know what our competitors tested last week, the upcoming race for sure will be different, but I think that these results helped my team’s confidence.»