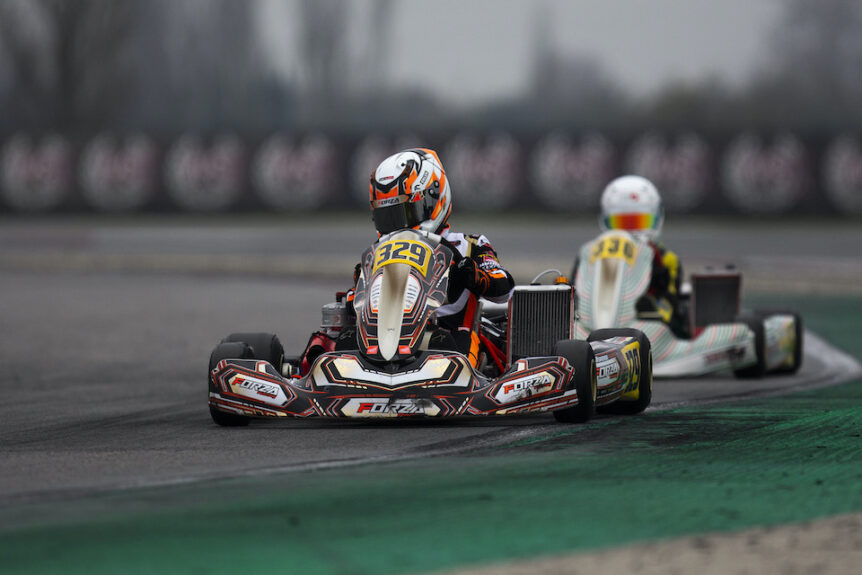 The double round of the WSK Open Cup staged at the Adria Karting Raceway marks the end of the Forza Racing 2020 racing season.

Jonathan Weywadt closes 2020 with two positive races. In Round 1, the Dane qualified 8th in his Qualifying Practices round and 12th in the heats. After the 3rd place in the Prefinal, Weywadt finished the Final in 6th place after having played for the podium throughout the race. In Round 2, however, after another extremely positive path, Jonathan finished 7th in the Final.

After two good qualifying sessions, Gustaw Wisniewski had some ups and downs in the heats. However, this did not stop Gustaw, who closed Sunday’s finals respectively in 25th place with 8 positions recovered (Round 1) and in 20th position with 9 places recovered (Round 2).

OK – Pirttilahti did it well

Nikolas Pirttilahti made his debut with Forza Racing at the double race staged in Adria. The Finn held the top 5 throughout Round 1, finishing 4th in the Final after battling the entire race for the podium. In Round 2, however, after another good start, he struggled a bit in the Final and he finished 8th.

Jamie Croxford, Team Manager: «The 2020 is officially over. It is time to take stock and I am generally satisfied, although Covid-19 has made things more difficult. The Junior drivers ended the year in a positive way, while in Senior we were consistently in the top positions. I think this last race was a good starting point for next year.»