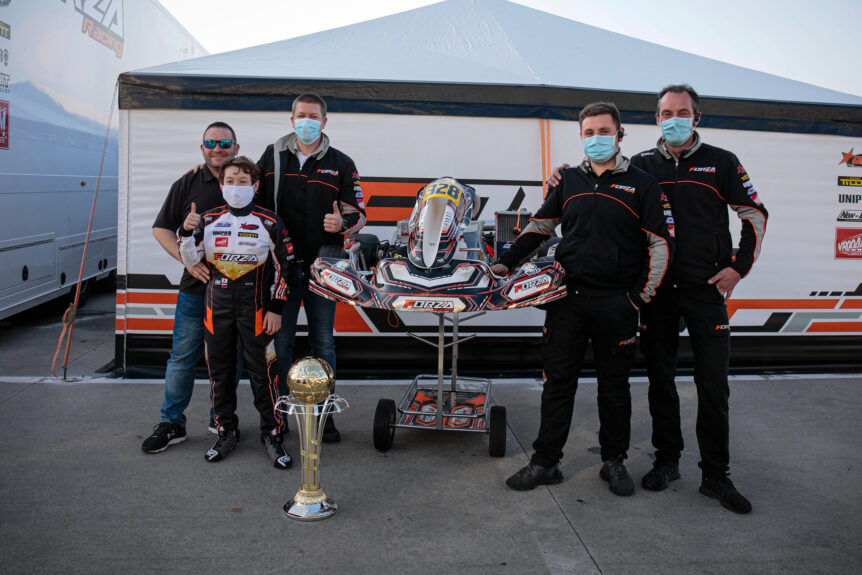 Kean Nakamura Berta was at his first OKJ in the WSK competitions, but he immediately played a front-runner role. The Japanese started his weekend with the 4th fastest lap (2nd in his group). He won 2 heats and he finished 3rd in his Prefinal. Started from row 3 in the Final, he made a good return crossing the finish line as 2nd.

Yevan David returned to karting activities after a period of stop. Although he didn’t reach the final phase for just one point, he made good progress that will be at the base of his OKJ international season.

Nikolas Pirttilahti’s Champions Cup started positively with 5th place in the Qualifying Practices. Pirttilahti then confirmed the trend in the Heats. On Sunday, he finished 9th in the Prefinal, while he was forced to retire in the Final.

Ricardo Gracia was at his first race with the Exprit Kart chassis powered by GFR’s TM Engine, and his weekend was all in crescendo. In the Prefinal Gracia returned 7 places crossing the finish line as 23rd, not far from the top17 (the best 17 drivers qualify for the Final).

Jamie Croxford, Team Manager: «I’m overall satisfied with the weekend’s performance. Kean showed an impressive pace, but most of all, everyone in the team worked tirelessly for the entire week. Luck was not always by our side, but I’m sure we’re going in the right way.»

It’s already the moment to return on track for the WSK Super Master Series, scheduled this weekend in Adria.