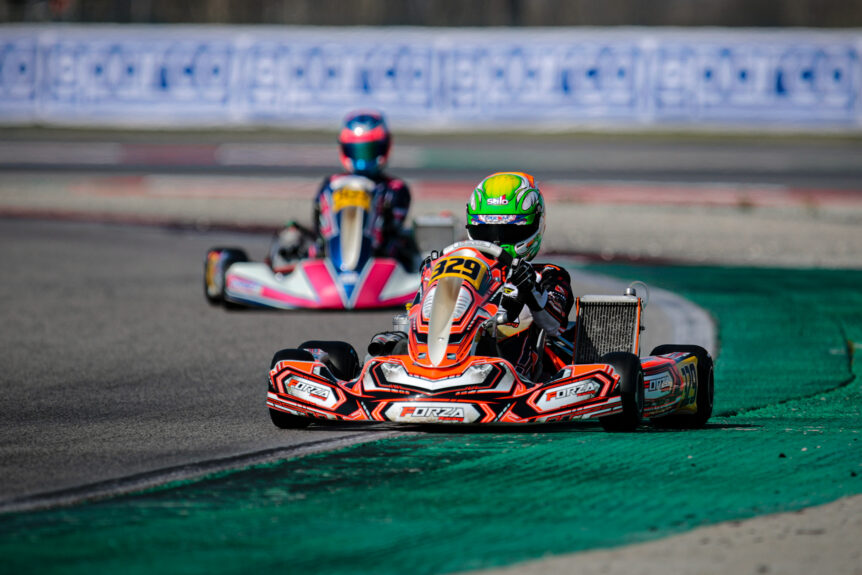 The team’s lineup in the WSK Super Master Series round 1 was the same of the WSK Champions Cup; Kean Nakamura Berta and Yevan David represented the team in OKJ, while Nikolas Pirttilahti and Ricardo Gracia competed with Forza colors in OK.

Kean Nakamura Berta was again among the protagonists in Adria. He started with the 4th fastest lap in his qualifying group. The Japanese had a good pace in the heats, but a bumper penalty in the last heat dropped him out from the top5 in the heats ranking. Nakamura Berta’s Sunday started with P6 in the Prefinal B, which means Row 6 in the Final’s starting grid. In the Final, Kean made a good return, managing to reach P5 with 7 places returned.

Yevan David brilliantly continued in his learning process in OKJ. At his second appearance in WSK races, David got a ticket for the competition’s final phase thank to a positive series of Heats. In the last one of the series he finished P11, very close to the top10. Then David made a good Prefinal with 6 places returned, reducing his gap to the top17 – necessary to get the Final access.

Ricardo Gracia got his first Final with our colors. He had a weekend in crescendo; his performance improved session by session, especially in the Final, in which he finished 22nd with 10 places recovered since the green lights.

Nikolas Pirttilahti had a weekend of comebacks. His race started with P49 in the overall qualifying classification. The scenario already changed in the heats, in which Nikolas gained 20 positions. The Finnish driver almost completed the mission in Prefinal. He was 7th, close to the top5, while a technical issue forced him to retire.

Jamie Croxford, Team Manager: «The result didn’t reflect the team’s efforts in some ways. All the drivers made good, improving session by session and matching the goals set by the team. Unfortunate episodes made things bitter on Sunday, but I’m convinced we’re working in the right way.»

Now it’s time to move to Muro Leccese, where the team will prepare the 2nd act of the WSK Super Master Series.