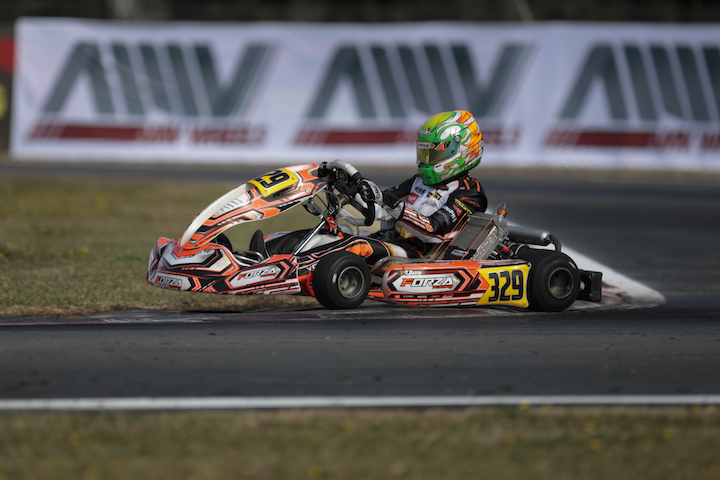 The 3rd round of the WSK Super Master Series placed last week in La Conca was tough for the team.

Despite the good potential showed in the test days and during the first phase of the race, things became harder on Sunday.

Kean Nakamura Berta was one of the fastest during free practice. Unfortunately, the Japanese driver had to quit the event due to a physical problem. Kean is in the course of recovery.

Yevan David had his best weekend since arriving in Italy. Yevan showed his speed immediately in qualifying, where he set the 12th fastest time in the group. In the heats he had good comebacks, even in the Prefinal, he had an encouraging start, but a contact put the word “end” on his weekend.

Ricardo Gracia continues to improve his performance, especially during the heats. A positive comeback allowed him to finish in 16th, recovering several positions from the start in the Final.

Nikolas Pirttilahti had a difficult weekend. After a positive qualifying session, the Finn had some difficulties in the heats, which caused him to fall back in the general standings. In the Final, a contact did not allow him to show his potential.

Gerrard Xie did a good job in his debut with our colors. At his first race in Europe in Senior class, Xie reached the Final. Gerrard immediately showed good driving skills and a big room for improvement. He crossed the Final finish line as 26th.

Jamie Croxford, Team Manager: “I’m disappointed with the final result. We had good speed, same as in Adria but it was not enough to finalize the weekend with a good result. The drivers once again worked hard, and this is a positive note. I’m sorry for Kean, and I wish him a fast recovery. Yevan confirmed his momentum, same as Ricardo. Gerrard had a very good first weekend with us, while Nikolas deserved more. It’s now time to turn the page for preparing Sarno.”

The team is now preparing the 3rd round of the WSK Super Master Series on the new circuit of Sarno.