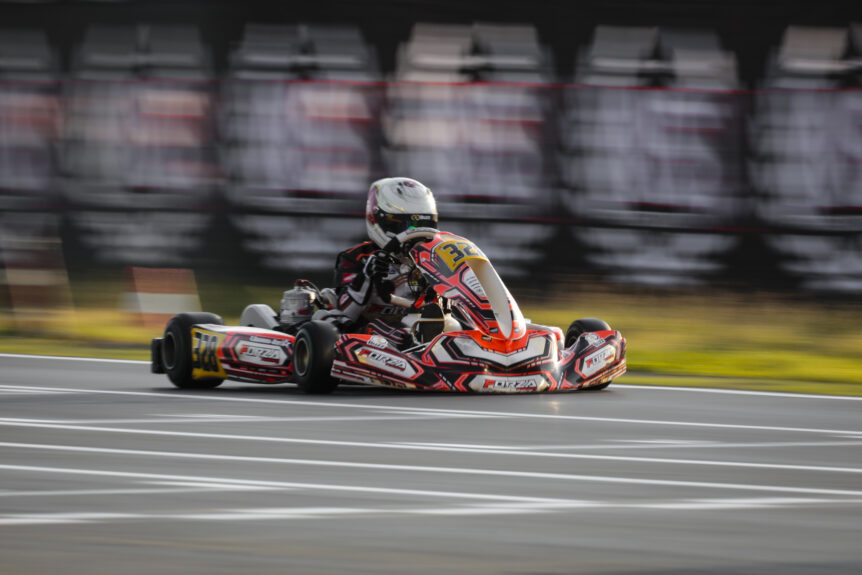 Forza Racing proves once again to be competitive in both OKJ and OK in the Super Master Series round of Sarno.

In the “new” Circuito Internazionale Napoli the team was present with 5 drivers split into OKJ – Kean Nakamura Berta and Yevan David, and OK – Nikolas Pirttilahti, Ricardo Gracia and Gerrard Xie.

On Friday Berta and David were close on their personal best. Berta qualified 9th of his group and David 10th. Kean had an incredible series of heat made of two 2nd place and one victory. Nakamura then won the Prefinal proving to be in the victory game. David remained involved in some crashes in the last 2 heats and it increased Yevan’s penalty score. The driver from Sri Lanka did a big comeback in his Prefinal gaining 8 positions from the start, finishing 13th.

Nakamura Berta was immediately pushed out in the Final, while David thanks to another important return (he gained 10 spots from the start) finished close to top10 in P13.

In OK Ricardo Gracia was Friday’s best-placed driver, he was 10th in the Qualifying Group 1. His teammates – in the same group – finished 12th (Gerrard Xie) and 16th (Nikolas Pirttilahti). Things got difficult in the Heats; Ricardo qualified as 35th, Nikolas as 37th and Gerrard as 40th. Sunday morning was a downside, Gracia qualified for the Final with a return of 9 places, same as Pirttilahti. Xie was close to gain his second Final in a row.

Ricardo and Nikolas had a final to forget, as the Finnish suffered a 5” bumper penalty that ruined his return – he was 16th in the standing. Ricardo remained involved in a crash at first corner and this compromised his kart and the race too. Despite the big damages, he crossed the finish line as 25th.

Jamie Croxford, Team Manager: «I’m as happy for the pace as disappointed for the result. Kean was pushed out after a few kilometers, Nikolas took a penalty and Ricardo could not avoid the crash. Yevan was the only one to have a Final with no problem and he showed a good pace. I’m also very happy for the spirit showed by Gerrard, who was close to getting the Final access once again.  We have a strong pace and I’m sure that the hard work will pay off very soon.»