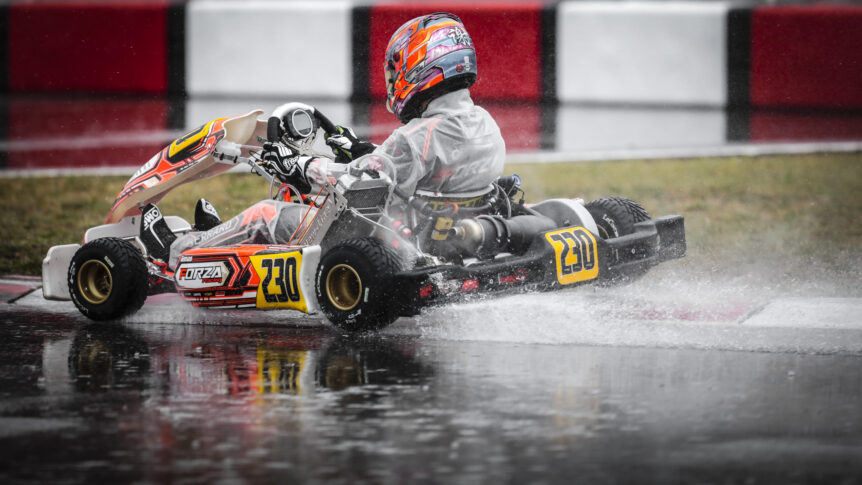 The rain fell on Sunday made races unpredictable at South Garda Karting in the event valid for round 1 of the WSK Euro Series.

The team confirmed the lineup already seen in this first part of the season. Pirttilahti, David and Gracia raced in OK, while David and Nakamura Berta defended our colors in the junior category.

OK – Nikolas Pirttilahti was our best-placed driver. He finished P15 under the rain, after a weekend full of ups and downs.

His teammate Gerrard Xie finished 19th at his very first time under the rain in Senior class, after a positive weekend overall. Gerrard was 8th in Prefinal’s starting grid but he had to face the rain difficulties.

The Final result didn’t show the true story of Ricardo’s weekend. The Brazilian took the 9th position in his qualifying session – 17th overall. A bumper penalty in the second heat made things harder in the heats classification. He finished P28 in the Final.

OKJ – Yevan David’s round 1 was hectic. The driver from Sri Lanka was competitive in tests and free practices, but he mistook the qualifying session. He was 20th in Group 1. Things went better in the heats thanks 2 positive returns on Friday and he gained 10 positions from the Qualifying. Despite his lack of experience under the rain, Yevan managed to access the Final, then finished in the 25th position.

Just the rain stopped Kean Nakamura Berta. The Japanese driver was one of the frontmen for the entire weekend. He took the pole in his group, then just retirement in the last heat prevented him from taking the pole for the Prefinal. In the Prefinal he retired and so he was forced to leave the competition.

Jamie Croxford, Team Manager: “I expected something more on results but the rain makes always everything unpredictable. Sometimes you win, sometimes you lose. Anyway, I’m fully satisfied with the efforts of everyone at Forza. They fought till the very last moment and it means a lot for me.”

The next race of the team will be the Round 4 of the WSK Super Master Series, planned for the next week in Lonato.