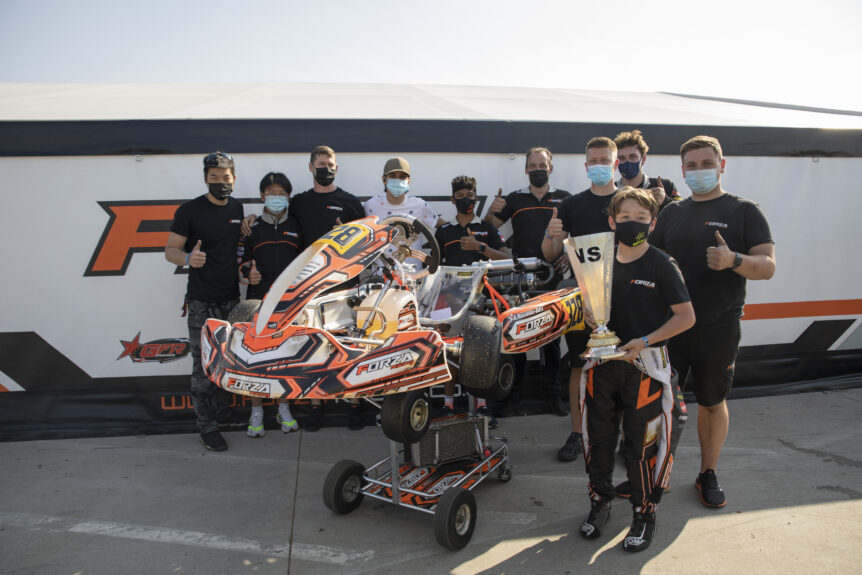 Forza Racing leaves the South Garda Karting with a trophy got at the last round of the WSK Super Master Series.

The team once again showed a good potential, especially in OKJ in which the team finished 3rd with Kean Nakamura Berta.

OKJ – Berta started the competition in the best way possible grabbing the pole position. Then he won 2 heats finishing 4th overall in the Heats standing. Kean then finished 3rd in his Prefinal and in the Final. Despite these are the first races in OKJ, Nakamura already took 2 podium endings, staying always on top positions.

Sonny Smith finished P10 in the Final after a race week full of learnings with us. The Briton was 32nd overall after the Qualifying Practices, but thanks to a positive series of Heats he concluded Saturday with 12 positions returned. 2 more comebacks in Sunday’s Prefinal and Final allowed him to finish 10th in the Final.

Mark Kastelic and Yevan David remained out from the Final due to a complicated Prefinal. Both Mark and Yevan showed good skills all over the week.

OK – Ricardo Gracia was the only one to enter the Final, as Gerrard Xie and Nicolò Cuman remained involved in some hard battles that prevented their to get a ticket for the Final.

Ricardo was one of the fastest drivers on track during the heats, always showing a top pace. Some unfortunate circumstances on Saturday and a technical problem on Sunday prevented him getting what he deserved.

Jamie Croxford – Team Principal: “It’s been a good weekend overall, podium apart I’m happy that everyone showed to be competitive. This makes me for sure more confident for the next races. Now the FIA Karting season will start and it will be challenging especially at the beginning because of different tires. We’re now move to Genk for the RGMMC Champions of the Future round 1 – it will be a good way to gain experience.”

This weekend Forza Racing will be involved in the RGMMC Champions of the Future round of Genk.