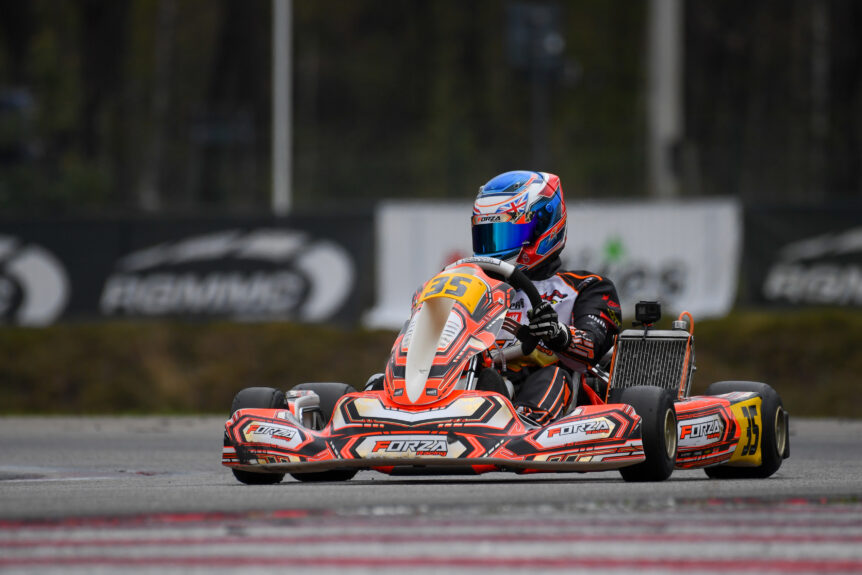 The European karting season started last week with round 1 of the RGMMC Champions of the Future.

The race was a good occasion to prepare for the upcoming FIA Karting European Championship, which will start in Genk in 2 weeks.

Sonny Smith finished on the podium – 3rd place – after a good Final. The weekend of Kean Nakamura Berta had a crucial setback in the Prefinal due to contact with another driver in the formation lap that forced him to quit the race.

In the Final Nakamura Berta had a strong return (13 positions with a 5” bumper penalty). He finished P20. Yevan David wrote his name in the international karting scene history as he was the very first driver from Sri Lanka to win a heat in an international competition. He also had strong Prefinal and Final. He finished 18th (originally 15th, but he received a spoiler penalty after the race).

Mark Kastelic was unlucky on Friday and this made things harder for him in the heats series. He tried to do his best but he didn’t succeed in qualifying for the final phase.

Things were more complicated for the Seniors. The best placed drivers is Nikolas Pirttilahti – P16. Ricardo Gracia and Gerrard Xie, unfortunately, remained out from the final phase.

Jamie Croxford, Team Manager: “It’s been a satisfying weekend. Everyone at Forza worked hard for finding set up solutions for the European Championship. In junior we already found good solutions, while in senior we still have to work but I’m confident we have a huge room for improvement.”