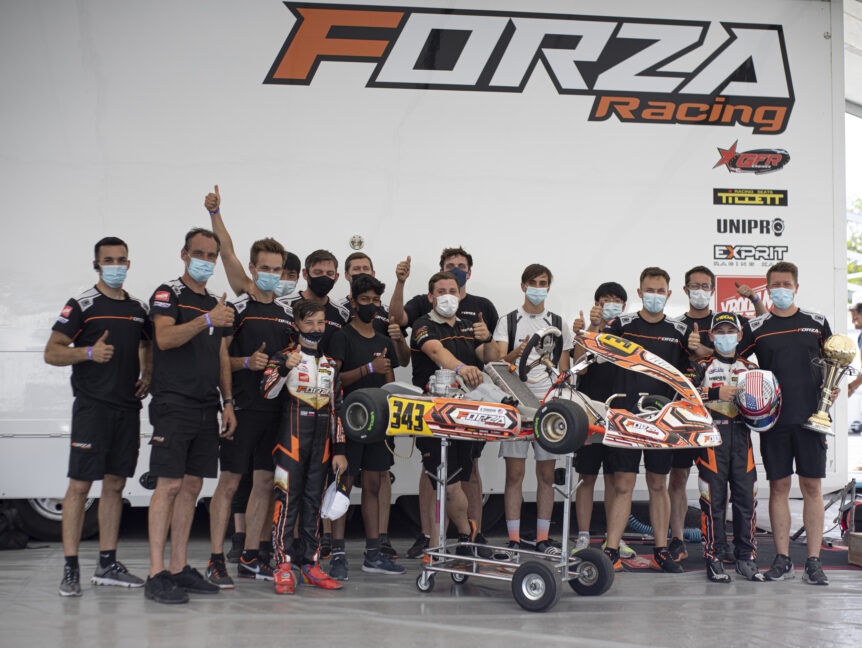 Forza Racing continues its momentum in Sarno, scoring a podium with Kai Sorensen in the WSK Euro Series final round.

The team was present at the Circuito Internazionale Napoli with 7 drivers, 4 juniors (Sorensen, Kastelic, David and Robinson) and 3 seniors (Gracia, Xie and Pirttilahti.

All the juniors showed a remarkable pace starting from Sorensen, who took P3 in the final after a good comeback after a complicated qualifying session (P53). Kai returned 33 positions in the heats and then 6 in the Prefinal. Edward Robinson, who had his first race with our colors, had a very positive weekend. His race was all in crescendo, he crossed the finish line as 16th with 17 places gained.

Mark Kastelic finished P25, he remained involved in the big crash that caused a red flag and then he started from the bottom of the grid in the restart. Yevan David had a difficult weekend and unfortunate circumstances costed him the qualification to the Final.

The Senior best placed driver is Ricardo Gracia who finished P21, one position ahead of Gerrard Xie. Gerrard had a positive Final in which he returned 11 positions. The track conditions hit Nikolas Pirttilahti, who struggled with the pace. The Finnish was 24th.

Jamie Croxford, Team Manager: «I’m very happy with Kai’s progress. He grows up race by race and I’m sure this is just the beginning. Also Edward had a very positive Final. We scored podiums with 4 different drivers since the beginning of the year in OKJ, the package is competitive with everyone. We still miss something in Senior, but I’m sure we’ll find  the right way soon.»