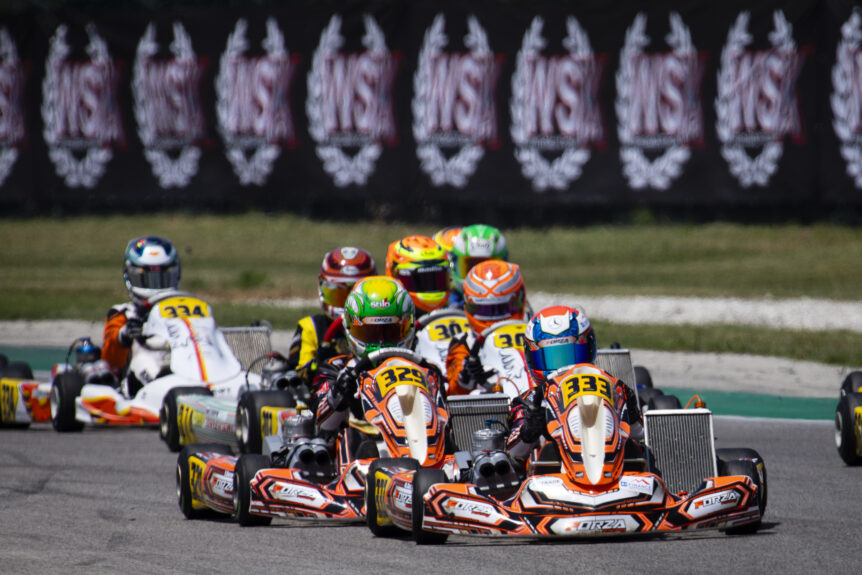 Forza Racing brought home a podium result in the 2nd round of the WSK Euro Series of Adria.

Mark Kastelic – at his first year in OKJ – brought home with his first podium result in the category. Mark finished 2nd after a concrete weekend, in which he always stayed on top positions. He qualified 3rd in his group, then he came 6th overall after the heats. He finished 2nd in Prefinal B. He had a quite difficult start in the Final but, thanks to his pace, he returned to P2, crossing the finish line close to the winner.

Yevan David had another positive weekend, he qualified 5th in his group and then he had a solid series of Heats. He started the Final from row 3; some battles and a bumper penalty regraded him to P17. Bad luck stroke Sorensen in the crucial moment of the weekend. He qualified P18 of this group but in the Heats he was one of the best of the field. He returned 20 positions from his Qualifying session. He did the same in the Prefinal, but he remained involved in a crash and this forced him to quit earlier the competition.

Kean Nakamura Berta suffered a bad crash in his first heat, it forced him to leave earlier the race weekend.

In Senior Gerrard Xie is the best placed driver. He was 15th in the Final with a comeback of 13 places. Xie’s WSK Euro Series round 2 was all in crescendo after a difficult beginning in the Qualifying Practices. Nicolò Cuman started brilliantly grabbing P4 in his TQ. Then he struggled in the heats and a bumper penalty in the Prefinal regraded him to P20 in the Final’s starting grid. Unfortunately he suffered a crash that forced him to retire from the race.

Ricardo Gracia’s weekend finished in a bad way. He was pushed out in the last corner of the formation lap, he was unable to start the race. He qualified P13 (Group 1) on Friday, then he was 14th overall in the Heats standings. It could be better result without the bumper penalty he suffered in the last heat.

Jamie Croxford, Team Manager: «Mark’s podium makes me very happy. This year we have a very young juniors line up, but everyone shows huge progress race by race; Mark is the right example of what I mean. The Seniors need to be more concrete in the race because the pace is there and they showed it with good comebacks. I’m so sorry for Kean’s crash, I really hope to have him back on track very soon.»

Forza Racing season will continue in Sarno in 2 weeks with the last round of the WSK Euro Series.