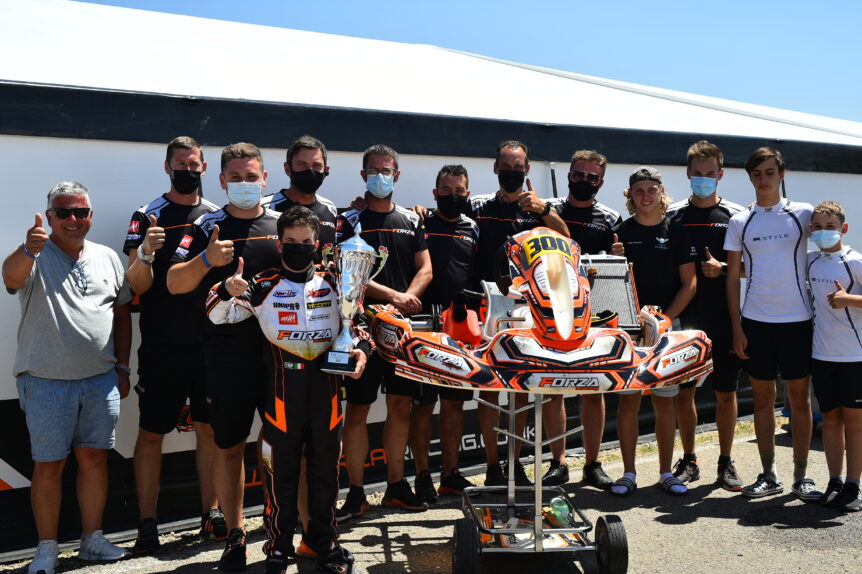 After several podiums in OKJ, Forza Racing grabbed its first OK podium of the season last weekend in the 2nd round of the RGMMC’s Champions of the Future at the Circuito Internacional Zuera.

Nicolò Cuman finished 3rd in the OK Final after a very competitive weekend. The result confirms the high level of competitiveness of the team in both junior and senior class.

Cuman took the 4th fastest lap of his group in the Qualifying Practices. Then he had 3 2nd place finishes and 3 fastest lap in the heats. The Italian driver then won the Prefinal (setting the fastest lap) and he fought hard for the victory in the Final in which he set one of the fastest laps of the race.

Gerrard Xie, Ricardo Gracia and Nikolas Pirttilahti gained the access to the Final but they remained involved in a crash that wasted their efforts. All the drivers showed good things in the heats.

Yevan David confirmed his positive momentum in Zuera. The crash in the Final doesn’t tell the story of his race. He set the 2nd time in his qualifying group. Then he finished 6th overall after the heats. He won the Prefinal but a bumper penalty pushed him back to P11. Mark Kastelic had a brilliant Sunday in Spain. He finished 14th, close to the top10, with 6 places returned. Mark had a weekend all in crescendo.

Kai Sorensen and Edward Robinson didn’t enter the Final due to unfortunate circumstances, but both showed positive things making the team confident for the last round of the European Championship of this week.

Jamie Croxford, Team Manager: “Finally we got what we deserve also in Senior! Since the beginning of the season we were confident with our material, we just needed the right situation to transform potential in result. Nico drove amazingly for the entire weekend and he showed huge progress from Sarno. The Juniors has another good weekend, just Edward and Kai have been unlucky in their way to the Final. Now we have to confirm what we did in the European Championship.”

The season continues this weekend in Zuera with the last round of the FIA Karting OK & OKJ European Championship.