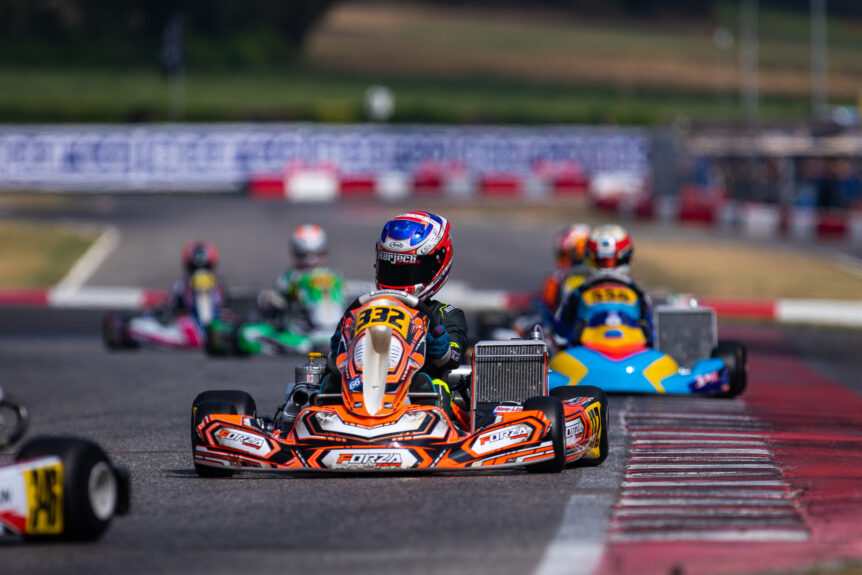 Forza Racing completed the first race of the second part of the season at the South Garda Karting showing overall good speed in both classes.

The British team was always in the top positions in the Qualifying Practices and Heats. A chaotic day of Finals unfortunately prevented drivers from gaining what they really deserved.

Also the newcomers Maciej Gładysz (OKJ) and Mark Kastelic, who recently stepped to OK, were immediately competitive. As well as Sebastian Ng; the driver from Panama made his first appearance in the European karting competitions in Lonato in very tricky conditions.

OKJ – Kean Nakamura Berta was the best placed driver, he finished P14 after a bumper penalty that pushed him back to 14th place from P9. Despite his 2 months of stop due to an injury, Kean’s weekend started promisingly with the 2nd time of his qualifying group. Also in the heats he confirmed the good pace, but he still needs to recover completely the race pace. Kai Sorensen finished P17, same as Nakamura Berta he’s been always among fastest but in the final he suffered a 5” bumper penalty.

The retirement of the Final doesn’t reflect Gładysz’s pace throughout the weekend. Maciej is still adapting to the Exprit/TM engine tuned by GFR material but already showed good skills.

Eduard Robinson and Sebastian Ng unfortunately didn’t get the access to the Final.

OK – Ricardo Gracia finished the Final in P15 and he’s our top finisher of the category. Ricardo made good progression during the weekend. Nicolò Cuman concluded in 21st place after a race full of battles. The Italian was among the top qualifiers on Friday – P4 in the second group. An unfortunate series of Heats made things harder than expected.

The lack of experience with slippery track prevented Gerrard Xie to show his true pace, he finished the Final P25.

Mark Kastelic was pushed out in the first laps of the Prefinal and it put an end on his race weekend. Mark was always close to the top10 at his very first race in OK.

Jamie Croxford, Team Principal: “The final result is a pity because we showed great speed with all the drivers. This race was not easy as we had 2 new drivers and Mark stepping to OK. I’m happy with the consistency of my drivers and I’m confident for the next races.”

The team will be back on track in Adria in 2 weeks for the last round of the WSK Open Cup.